DO NOT MISS THIS : It gives me great pleasure in informing you about my team which has started a travel-writing magazine to feature travel-writing and let the world know about places and cultures through the eyes of travelers. Please refer to www.uncagedmagazine.wordpress.com for more information.

Any queries are welcome at sourjyasourjya@gmail.com or uncagedmagazine@gmail.com. We also welcome open queries on our Facebook Page at

I have felt the chase: the chase that keeps burping at your ears the anxieties of future, unwanted encores of every fear that you feel like burying alive, and then choosing to step out of that mental cemetery, for a second,  to touch the untouched, try the untried, gifts one those precious chapters bound tight into a single rosary that one clings to and counts on till the curtains come down. And then the bow is prouder. Richer. 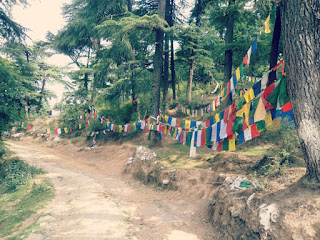 To start speaking about Mcleod Ganj, this is exactly how you’d expect a traveller’s darling town to look and be like. I have experienced every attire of her but her “pretty snowy”. Besides, one would bluntly and bleakly say “commercial” and keep it loud unless he breaks stony and steep passages to reach the town everyday and witness what goes on, listen to a silent scream called “Free Tibet”: a nation, a culture clutching to a hope, grovelling to the calmest god and promising the snow lion that one day shall it roar. 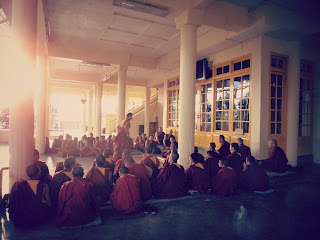 And in the midst of that frustration and insularity, you find many smiling, bowing to a subtle ‘thanks’ and giving a ‘thanks’ back. Of course, I had never thought something like this could happen when I’m hailing from a grand city where the only factor that is taken care of is liability. This was my attempt to tear away. Here you find no comments or frowns to an undeserving success of a fellow roadside businessman and might find all the keepers sharing their daily tales over glasses of tea or old card games unless you arrive at a stall and invite a kind “Yes, sir?” 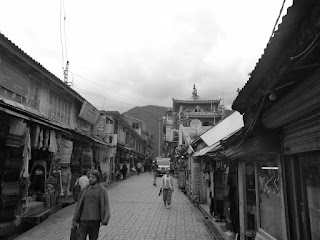 The roads divide into two ways, each way helped by two passages, thus making life easier for vehicles. There is a strange show stopper who roams around in restaurants every Saturday promoting a live show in some school downtown, which they organise to raise some money. In fact, the terrible tragedy in Nepal had triggered every small organisation in this town to raise money to help our nearest friends. Well, everyone in the town knows him: brings titters on faces of stall-keepers as they claim he’s crazy or some say, a wannabe, but for a traveller who had known just some words about this distant town and had pulled and pushed himself through the Indian scorch and deserted railway stations, a picture with a funny pose and a couple of handshakes and good wishes are enough, aren’t they? But the best thing about a traveller who stays in this town is that after three days you know so many faces because there are not too many people around. 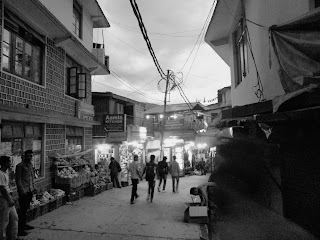 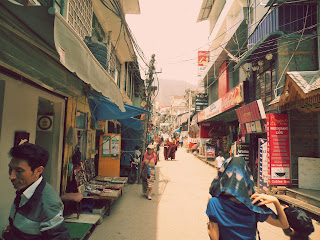 This way I get to know Simon Davis at the library cafe: a lonesome traveller from Birmingham and about him, it is pretty hard to describe how a person he is because I never got to know him very deeply because you see, some people are so cool with answers, so saturated with subtlety and readiness that they hardly understand or even pretend to understand intentions or hopes behind questions and every time they feel there is being an attempt to know them beyond their ‘shallow bay’, there they are, ready with the marker to draw the line. 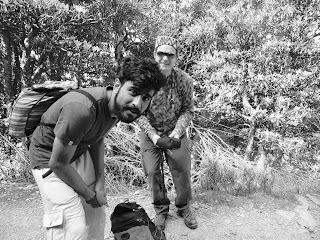 And he is one among them. Apart from that, this person has a strange affair with India and her charm. He has not been employed for quite a while and most of his stories revolve around Northern India: her mountains, plains, valleys, lakes, and beyond that, a love unspoken of. This was the fourth time in his life that he was visiting the same Indian places he had every other time and I recently received his mail where he says he would head to Reckong Peo, Kinnaur and Spiti Valley. He is one of those who prefer staying at a place for a while and getting to know it better, than just stepping on and flying away. 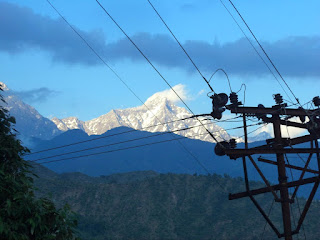 Triund is a hill, a small piece of art that the town offers you at the cost of quite a tiring yet thrilling journey. It is a one day trek, basically, sometimes urging you to take a tent up there and stay the night, but also pushing you to use the last bit of your tank to walk for an hour-and-a-half more, another five kilometres uphill to reach the snowline. The day had an exceptionally strict sun, clear and not windy. I still cannot believe to have selected such a horrible day to trek on, but perhaps that is how you make a horrible day memorable, and both being driven by passion: one who had never seen the natural snow and another who’d be going there after eight long years and in Simon’s words, “a painful wait”. An oath was taken to go pro, taking no vehicle and using the uptown hill road till Dharamkot and heading to Triund thereafter. The road is normal, not many steep breaks, but just stony, with a lot of rickety and curvy trees, some small, some large, blanketing the skin of the hill and sometimes large old logs, ancestors, lying defeated and dissected from the wild neighbourhood, wise and resolute, whispering their fables yet living the eternal sermon. 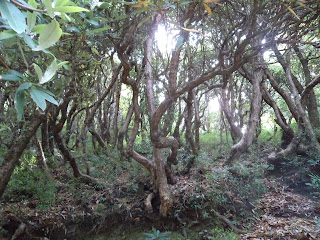 The woods are suspenseful, sometimes giving away a wild noise making you all the more careful about what is at your side too. Then we stopped at a cafe which is called ‘Magic View’ and the name sufficiently fits the scene as from up there, we could see the town’s horizon and how it lazily sits on its butt on the hill with some of its houses askew and roads forcing themselves out from among knots of foundations. I hardly remember to have stopped after that and there could not be much of observing the atmosphere because at the same time, I had to be very careful walking the complex path and making sure that I don’t twist any of my ankles. 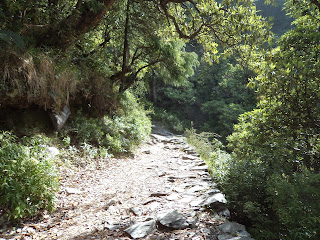 While we were a minute away from Triund, a traveller on his way back said “You’re here, finally...it’s verrry beautiful” Well, this is a courtesy, perhaps, for everyone who is on their way downhill to tell the ones heading the opposite way, the amount of time till the destination. Even we did that on our way back and I realised that it is quite funny as you see a lot of happy and bright faces with a “Really?” and some frustrated “Holy shit!” and altogether a feeling of pride and confidence that you already had been there, felt it and done with it. But honestly, you can never get done with that scenic beauty. The impact lasts forever. 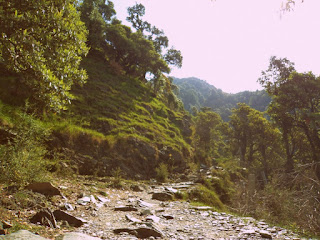 Triund is a pretty plain at the top of a hill, scenery of greenery, cattle, shepherds, fresh air and cleanliness and the mighty Dhauladhar Ranges drawing its boundary. We found a place under a huge rock to take a break and lunch, but the place was rather, a strange one: a gentle, wet land, kind of a slope with a small stone, manually fixed in the ground, dressed up and painted red to give it a godly rank and just ahead was the release, the nothingness, the negligence of nature. There were oaks and pine groups scattered around, looking fresh and fit, proudly owning their turfs and clung to the body of the hill, a huge rock rebelling against gravity, to hold itself on the cliff, capped with dried mud and grass passing an impression of a drunken Mother Nature to have had thrown up on it, while on her way to painting this casual landscape on an unending crazy canvas. 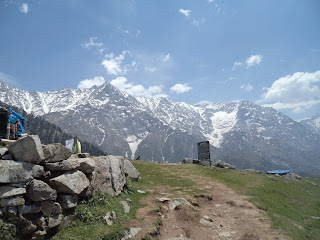 With such funny impressions playing their own ways in my mind, we reached the snowline. The place has no name: just “snowline”. The snowline marks the beginning of the Dhauladhar, greeting a trekker with a frozen brook and mixtures of mud and snow and a significantly wet land, boasting of a single cafe in the wilderness, with simple food, tea and water bottles. This cafe is a camp-cum-cafe. In other words, it provides accommodation to the ones who want to stay there for the night. Unfortunately, our day had no campfire scheduled for the night and threats of an incoming thunderstorm which did descend upon the town as the night befell. The beauty spot of the frozen brook was mesmerizing: a team of rocks gathered at the area where the sun rays strongly hit and thenceforth the ice melting to water and rushing down. There was a rocky plain which, once, seemingly, happened to be a venue for two livelihoods, but now, there just remain the ends of them. 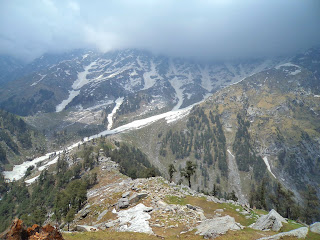 We meet a funny team of two Italians – Andrei from Rome and Ricardo from Tuscany. Andrei was mostly busy all throughout with his mistakenly rolled joint which had probably hurt his trip, and also because he had burnt a part of his moustache while lighting it up. Moreover, he sounded like a crazy fan of Roma and my intention became just to have a little fun with his temper. That’s how I reacted – “Oh yeah? I think Di Canio could have done the same job in Lazio as Totti did throughout his career had he stayed there and not moved to Premier League.” That pissed him off, really. He wasn’t ready for such an instant and abrupt criticism of their “Last Roman Gladiator”. But no, I was messing around, I confessed, and it did take a short term yet respectful appraisals of Roma’s history to bring him back to comfort. 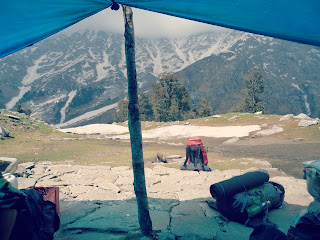 Ricardo had been off, roaming around the place. So he came back while we were still talking and Simon asks him, “Hey, so you fixed your Italian flag at the top of the cliff or what?” Ricardo’s reply was the most amusing of all – “Ah, no...no...we are Italians...we don’t fix flags. We like a place, we build restaurants.” That definitely makes sense, I agree. Besides them discussing food, it was fun to listen to his travel stories – all the way from Cambodia to India through Thailand, their funny questions to shepherds in search of “Cheese” which the shepherd, seemingly, could not understand and thus, reacted with a question along with an expression of utter befuddlement, “Kaun sa cheese?” (“What thing?”). 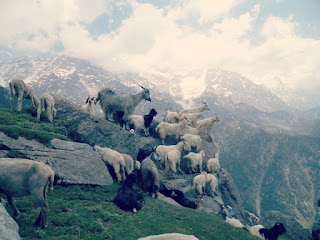 This guy, Ricardo, had left his family to open a restaurant at a Cambodian beach. While on our way back, had a sudden urge to brush his teeth, I had no idea why unless I found out that it was his intention to explain to us the pros of a supposedly magical ayurvedic “Dant Manjan” (Tooth-paste) which he had found at Varanasi. He was busy talking about his inherent talent of being able to bargain anywhere on Indian streets. This guy was crazy: an untamed mystic seeking awe and trying new jumps and moves although tittering before every, but never thinking twice: much like Sal Paradise’s beloved Dean Moriarty. For me, having been wonderstruck by the puzzling beauty of the place, I couldn’t talk much but just listen and keep their actions and words registered in my mind and hence, I could tell you. 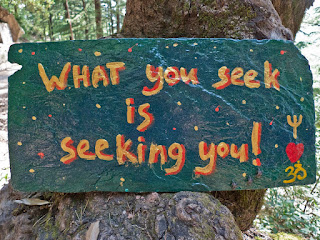 The dusk was just orange, pure and clear. Talking to my own self just about having made it, tired and wasted, faced the thunderstorm that the evening had to offer. 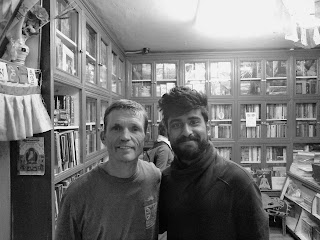 Please be a part of these...

Some movie suggestions for GALLIVANTERS..